When I bought my first home twenty some years ago it was a beautiful day in May when we signed the paperwork and were handed the keys. We worked quickly to unload the rental van, mainly so I could get to one of the shovels I had packed inside.

Within hours I had made several disappointing discoveries, construction packed clay with no good black soil like we had on the farm where I grew up. How would I plant my garden in this “soil?” It’s no wonder the dogwood, spirea and junipers planted around the foundation looked so bad. I thought it was just the black plastic with 4″ of landscape rock that some idiot had put around everything that was causing their decline, but now I knew it was probably this construction fill.

I had an idea that came from something I had observed many times on the farm when I was a kid. Stacking bales of straw on a baling rack was a skill that took a while to completely master, and until that then, a few bales would often jiggle off the stack before the rack reached the barn. If a bale ever broke a string during the tumble, we’d maneuver it over near the barn intending to restring it and pick it up later. A few bales were always forgotten and would soon be rained on and start to rot. As they decomposed, a few thistle seeds would land on top and sprout, and the results were thistles that looked bigger and healthier than any of the nearby thistles growing in the soil.

My to plant a garden evolved quickly, I decided to grow my vegetable garden in bales just like those thistles, this sounded logical to me and surely I’d find others that had tried this before to give me a little guidance. This being the early days of the internet, online research wasn’t nearly as easy nor as complete as it is today. I found nothing, even after contacting some of my old horticulture professors at the University of Minnesota, I ran into nothing but dead ends. The librarians at the two biggest libraries around found nothing for me, and so I moved ahead, without a guide or plan, but with a whole lot of ideas about how to make this work. I tried different techniques, and applied different sources of nitrogen which logic told me would encourage the straw to decompose more quickly.

Success immediately bloomed, and that first year I learned a whole lot about the methods that worked best and how to get maximum production out of the bales. One thing lead to another and now I am teaching seminars about how to plant a Straw Bale Garden, giving talks, writing books, and appearing around the country on radio and T.V shows, extolling the virtues of this crazy but amazing new way to grow a garden. No soil required! 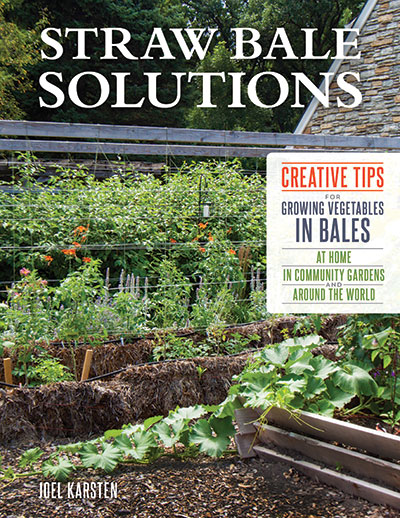